...for man nor beast. And I oughta know, being both a man and a beast, because I've just come out of it, pausing only to snap this picture on the way -- that's the view from 29th Street and 3rd Ave., with the Chrysler Building all but obscured by sleet. 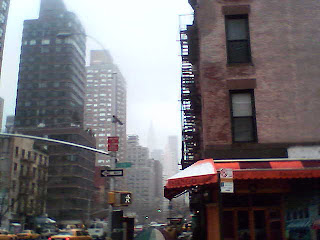 The picture comes from my LG cellphone, which I must confess to being gravely disappointed with. On Wednesday night, my buddy Dan and I went to see the Shins at Madison Square Garden Theater (one sweet venue, so much cooler than the Garden itself, which IMO swallows up bands and then spits out their bones), where I whipped out my cell, already thinking of my duties as a guest-blogger, and took the following shot. 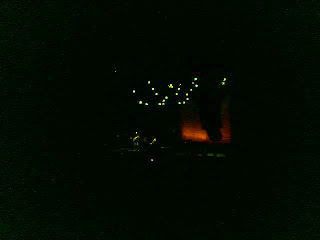 Okay, if I found that picture in a year or two, not only would I have no idea who it was; I wouldn't even have any idea what it was. The view from the bridge of the Enterprise upon entering the Horsehead Nebula? A late-night shot of the Brooklyn Bridge?

The Shins, by the way, are a wonderful but strange band. They seem to have at least two distinct sides. Sometimes they are capable of rocking out, as they did in their encore, a terrific cover of Jonathan Richman's "Someone I Care About" (but don't take my word for it), and then sometimes they are so freaking mellow that it just doesn't work live. So about half the show was dancing in the aisles, and half was wondering if I had any e-mail messages waiting . . . On the other hand, this did make it easy to decide when to go for beer.
Posted by Paul Witcover at 11:18 AM

My guess would be the baleful glow of Huitzil eyes by the light of a spritz of coldfire.

Hey, I arrived home after work to find the Amazon delivery containing Tumbling After (and Spin and Accelerando). Unfortunately I had a meeting most of the night but I got at least 50 pages into it and I'm a-lovin' it. Favorite line so far is the one comparing seagulls to shuriken. I have a question though: I'm absolutely positive I've never read this book, but the part with Kestrel and the hangover is giving me acute deja vu. Is it my imagination? (Wouldn't be the first time ....) Also, is this the cover you didn't like (the one with the blue feathered being and bald lady in the seawrack)? I don't mind it at all.

Yes, that's the hated cover. On its own terms, I don't dislike it; the artist is a multiple Hugo winner, which speaks for itself. But I didn't feel it was appropriate for the book and its intended audience.

As for Kestrel and the hangover -- I think most of us have been in similar situations at some point in our lives, hopefully not too recently! Perhaps that accounts for the deja vu the deja vu.

I haven't read Accelerando but Spin is excellent; I reviewed it a while back for scifiweekly.com.

Sorry you were stuck in sleet, Paul. I would like to report that (cue gloaty musick) yeserday San Francisco was perfect: blue sky, yellow sun, and 73 degrees. Ahhhh, Califa, j'adore.