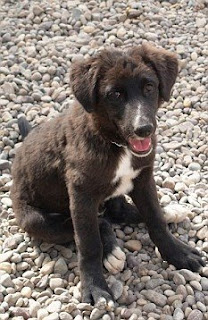 Sgt. Gwen Beberg has been in Iraq 15 months past her out-date (boo for stop-loss). In that time, she rescued a cute little pup who she named Ratchet, and who helped her get through her time in the war-zone. Now Sgt. Beberg is going home but the War Department is telling her that Ratchet must stay in Iraq--an almost certain death sentence for the poor pup. You can read more details at the link above, which is to article on CNN.

It's against Army Regs for soldiers to adopt dogs, but, of course, the Army dog is a long long tradition--both with war dogs official and dogs unofficial. And needless to say, Sgt. Beberg is distraught at the thought of losing her precious pup--and he is precious, isn't he?

You can help Sgt. Beberg and Ratchet by signing a petition asking that Ratchet be allowed to leave Iraq with her. You can also donate money to the SPCA sponsored organization Baghdad Pups, which is dedicated to helping soldiers like Sgt. Beberg get their buddies home. Please consider adding your voice, and possibly a few bucks, to this worthy cause. It's a small cause, true, but such small causes are the grace notes of our humanity. Sgt. Beberg has served her country well--her country should be willing to return the favour, particularly when the favour she asks is so very small. And cute, and fuzzy, and lovable.

Please help Ratchet!
Posted by Ysabeau Wilce at 10:00 AM