A Kindred Spirit for Udo! 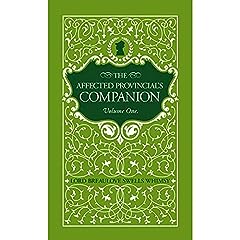 If Udo works hard, someday perhaps he will grow up and be a Mammal of Paradise, too. At least he has Lord Whimsy to show him the way...

I bought The Affected Provincial's Almanack when it was only a zine, available at fine zine stores everywhere. In his manifesto for the Dandy of the Twenty-First Century who must navigate the treacherous waters of yabooism, low-rise trousers, and floppy hats, Lord Whimsy gives both hope and sartorial advice to all those who understand that if clothes makes the man, then many men today are made of pretty poor stuff. Now this magnificent tome has been reprinted by Bloomsbury and is available to those who have been born to Dandyism, those who have achieved Dandyism , and those who would have Dandyism thrust upon 'em by their lady-loves.

What is a dandy, you ask? Lord Whimsy explains: "A Dandy uses himself as the focus of his art; his dress, manner, speech, and mind are his palette...The Dandy is a 'palace within a labyrinth'". Consider Oscar Wilde, Beau Brummell, Fred Astaire.

The Affected Provincial's Companion contains such useful chapters as "On the Perils of Sportswear" (a peril--for both men and women--which I myself believe can not be characterized strongly enough); "Dandyism vs Foppery" (by which scale Udo comes out, alas, on the foppish side); and the absolutely essential "How to Ride a High Wheel." For those seeking an even higher state of being: "How to Become a Bon Vivant" provides detailed instructions. Informative charts and graphs are plentiful, and the book itself is deliciously bound in acid green paper, with silver emboss.

"If only more guys today would pay attention to aesthetic geography and arctic peat masks, as Lord Whimsy so bids them; perhaps then the streets of Califa would be transformed from a wretched river of sartorial abominations and slouching postures into a shining sea of "Ambassadors of Heaven"--From Guys to Gentlemen!"--- The Warlord's Wear Daily

"A gentleman who can turn a rustick woven flower pot into a hat is a gentleman to watch. Chin straps for all!"--The Dainty Pirate

Available at fine bookstores everywhere, and, of course, Amazon, as linked above.

Posted by Ysabeau Wilce at 5:23 PM